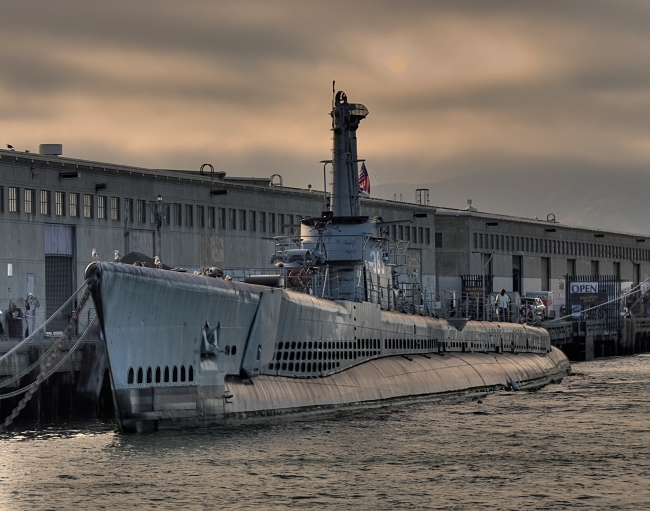 The USS Pampanito, a WWII submarine museum and memorial, recently received a new 4-jaw chuck and adapter plate from BISON USA. The museum’s goal is to bring maritime history to life, and to make the Pampanito as complete and accurate to her 1945 configuration as possible. The museum educates approximately 4,000 students in day and overnight programs, and hosts over 100,000 visitors a year, making the USS Pampanito one of the most popular historic vessels in the country.

The crew is always repairing, and restoring the equipment on the boat so it can be better preserved and interpreted. For the past few years the crew of the boat has been able to use a shared public machine shop, but having an in-house shop was crucial. In Nov 2015 they received the donation of a Bridgeport mill and in Feb 2016 they received the donation of a LeBlond Regal Servo shift lathe with almost no tooling. BISON USA has donated a 7-850-0800 - 4-Jaw 8" Semi-Steel Plain Back Independent Chuck with Solid Jaws and a 7-878-0860 - D1-6 adapter plate.

“It would not be possible for us to restore Pampanito without the help of people like you and companies like BISON”, said Rich Pekelney, a crew member restoring USS Pampanito. “This donation will prove crucial to the restoration of the submarine, as this quality chuck will be used for all the high accuracy and irregular work on the lathe.” Jamie Schwarz, President and CEO of BISON USA Corp said: “We are excited at the opportunity to give back to the community, and give the USS Pampanito new life.”

Founded in 1948, BISON-BIAL is the largest manufacturer of technological tooling for machining in Poland and has been an industry world leader for many decades. BISON’s vast product line is well known in both local and international markets. More than sixty years of experience and technological development have made BISON products recognizable for their high quality, durability and precision. We continue to remain a leading manufacturer of machine tool accessories worldwide. BISON also offers a wide range of services, including technological solutions for special machining application equipment upon individual customer requests.

USS Pampanito (SS-383) is a World War II Balao class Fleet submarine museum and memorial that is open for visitors daily at San Francisco's Fisherman's Wharf. Pampanito made six patrols in the Pacific during World War II during which she sank six Imperial Japanese ships and damaged four others. The USS Pampanito is being restored to a specific point in time, late summer of 1945, to represent the height of WWII submarine development. The Maritime Park Association has scoured the country in search of missing equipment and spare parts. Almost all of the missing items have now been replaced and much of the equipment on board has been restored to operation.

Loading
We use cookies and similar technologies to recognize your repeat visits and preferences, as well as to analyze traffic. To learn more about cookies, including how to disable them, view our Cookie Policy. By clicking "I accept" on this banner or using our site, you consent to the use of cookies unless you have disabled them.